Cilla the Biopic - A Rouetmaster Moment

October 2014 the BBC screened the biopic, Cilla. In one of the scenes, they showed Cilla meeting up with Ringo Starr in the el Cabala. They portrayed the El Kabala [sic - their incorrect spelling] coffee bar, as a greasy spoon cafe on the "Dock Road". To put the record straight I sent an email to the Sunday Times  "You Say" column in the Culture Magazine which was published on the 13th October 2014. The comment prompted a number of responses over the next few weeks.


Enjoying Cilla but irritated by a "Routemaster moment". The el Cabala coffee bar, spelled with a "C" not a "K", was not a greasy spoon as depicted but Liverpool's first high-class coffee bar at 96 Bold Street, the poshest shopping street in town. Next door was la Cabala and both were owned and run by 2 Hungarian brothers, the Kushners. The splendid Palladian frontage is still in situ. The place to linger over a Cafe Borgia and a Sobranie Black Russian cigarette in the late 50's early 60's.

I submitted the comment with supporting evidence a paper by Helen Taylor, "Liverpool 8 and 'Liverpool 8': The creation of social space in the Merseybeat movement" (link). She quotes from Rodger McGough's book Said and Done.

McGough’s ‘first cappuccino’, in ‘El Cabala, a glass fronted, airy café on Bold Street’, is considered a significant moment, both because of its novelty and for what it represents of this lifestyle (McGough, Said and Done: the autobiography   (London: Random House, 2005, p. 142)

This reminder of an icon of my formative years got me going particularly as it appeared from initial investigations that many of the recollections from the collective memory were as bad as the BBC's research, confusion seemed to reign. Confusion with locations with similar names and recall of the geography were commonplace, a bit of research was called for.

The first thing you notice is how many different (incorrect) spellings of the name there are on the internet, some by those who should know better - the BBC. The correct spelling is el Cabala, with a small e and a capital C, not a K. The site of the el Cabala the was 96 Bold Street, now the home of "Next to Nowhere" a bookshop. The frontage is quite distinctive with two grand Palladian granite pillars and decor. Interestingly, to confuse memories further, there was also an el Cabala in Southport owned by the same family. The Bold Street place had a mezzanine floor. It was the first place to serve Espresso coffee and Cappuccino dusted with chocolate and cinnamon. My favourite drink was a Cafe Borgia, we would probably call it a Mocha today Milky chocolate, an expresso plus cinnamon and nutmeg sprinkle. Russian tea was also a favourite with many, black tea with lemon. Whatever you drank it was usually accompanied by an exotic fag, Sobranie Black Russian or Passing Cloud were my favourites but Gauloise, Lucky Strike, Camel and even Capstan Full Strength and if you were of a certain persuasion Sobranie Cocktail cigarettes were amongst the pollutants we puffed on our decadent visits to this establishment. I even graduated to a pipe at one point. As with all good academic research, I have corroborated my sources with a paper published by Helen Taylor, "Liverpool 8 and 'Liverpool 8': The creation of social space in the Merseybeat movement." Source: Exegesis (2013) 2, pp. 34-44 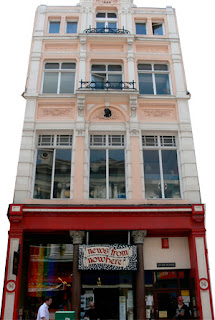